London Bridge is Down

Over the course of her long reign, Queen Elizabeth II had been many things to many people: a loving wife and mother and a dutiful queen. Few people in history have served their country with as much distinction and grace as Queen Elizabeth II. For over 70 years, she has been a symbol of strength and stability for the British people, and her impact is felt worldwide. She was a national treasure and was much beloved by foreigners as by her own people.

Queen Elizabeth II was born on April 21, 1926, to parents King George VI and Queen Elizabeth. She became queen at the young age of 25 after her father passed away. Since then, she has remained a force for good, carrying out her duties with intelligence, and kindness. She saw her fair share of challenges during her reign, from economic recessions to World War 2. She conducted hundreds of engagements each year supporting charities, businesses, and other organizations. Here are some of her secrets that made her an amazing queen and leader.

First, is continuous learning. Queen Elizabeth was constantly striving to improve herself and her leadership skills. The second is putting people first. She was known for her compassion and concern for others. This demonstrated to her team that she cared about them as individuals and was willing to go above and beyond to help them succeed. Finally, her ability to remain calm under pressure. As anyone in a leadership position knows, there will be times when things get stressful and overwhelming. However, Queen Elizabeth always remained calm during stressful times, even during some of the most challenging moments in her reign. This allowed her to think clearly and make decisions that were in the best interests of her people.

Queen Elizabeth’s years of experience, willingness to learn and commitment to putting others first made her a role model for leaders worldwide. President H.H. Sheikh Mohamed Bin Zayed tweeted: “I extend my sincere condolences to the Family of Queen Elizabeth II and the people of the UK. Her Majesty was a close friend of the UAE and a beloved and respected leader, whose long reign was characterized by dignity, compassion, and a tireless commitment to serving her country.” The UAE has begun a three-day mourning period to mark the death of Queen Elizabeth II. Flags in the UAE and at embassies abroad will fly at half-mast. Our team at Step Up International extends its deep condolences to the family of the Queen and the British people. May her soul Rest In Peace.

Loved this? Spread the word

COACH KARDAN is an expert in public speaking training and leadership development for leaders and government employees. He is the author of two best-selling books in 2008 and 2012 in Japan as well as the chairman of two international training companies in Dubai and Tokyo. He is an executive coach to fortune 500 CEOs and their management teams and has trained thousands of senior leaders to improve their performance and increase their company's revenue to more than 2000% within 3-5 years.

On this special day, we celebrate the Union of our 7 Emirates END_OF_DOCUMENT_TOKEN_TO_BE_REPLACED 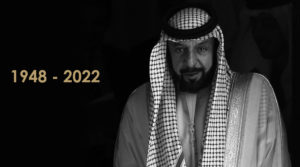 Dear All, The people of the UAE, the Arab and Islamic nations, END_OF_DOCUMENT_TOKEN_TO_BE_REPLACED

keep up with the latest trends!